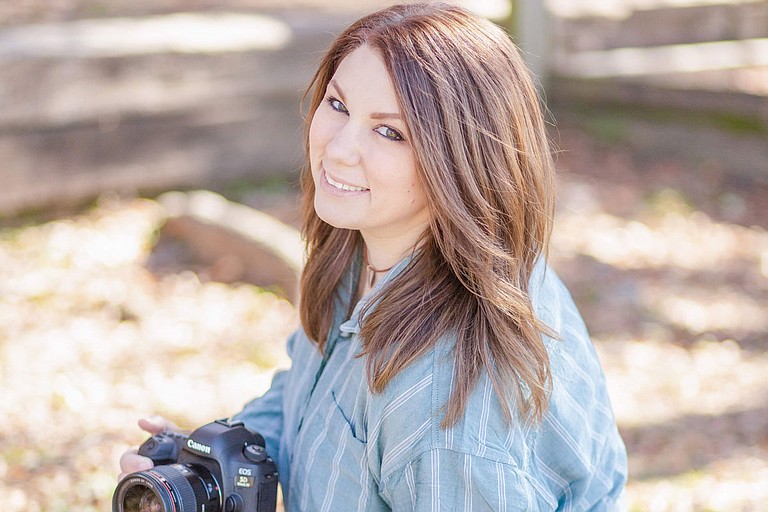 Everyone goes through struggles. Everyone has times in their lives when they feel like they are doing everything they can to simply endure. Sometimes we hold onto these circumstances and let them cage us. Other times we gather the courage to say enough is enough and reclaim the reins that govern our lives, moving forward. Flowood resident and professional photographer Whitney VanGorder is one of those people, as she uses her past to motivate herself to be a positive influence for those around her.

When she was 4 years old, VanGorder's parents divorced and remarried. She primarily lived with her father in Byram, but liver cancer took him away from her when she was 13 years old. Afterward, she moved to Brandon to live with her mother. During her first year there, she led a normal life, but her father's passing had deeply affected her.

"I was attending church and being the good little Christian girl who came from a private school (Hillcrest Christian School)," she says. "But then I started hanging out with the wrong crowd."

When she was 15 years old, an older man who lived in her apartment complex sexually assaulted her.

"From that point on, I lost a lot of self-worth. I started using drugs and drinking. It was really, really hard. ... I just didn't care about life anymore. I didn't care what happened to me," she says.

By the time she was a legal adult, she says she was pretty far down the rabbit hole of drugs. A month after she turned 19, though, she learned she was pregnant with her son, which changed her life. She decided that being a mother would become the most important thing for her. Unfortunately, postpartum depression took its grip on VanGorder after both her son's birth and her daughter's birth a year later. By the time she was 21, she was a single mom living day-to-day to raise her kids.

She eventually began to attend church again when a man she was dating at the time invited her. At first, she says she felt out of place, but her perspective changed over time after she rekindled her faith.

"When I started to regularly attend church with him, I started to really forgive myself. I felt like God was telling me that it was okay and that I was forgiven and that my past does not define who I am," she says. "That's when things started to turn around for me. I had a new outlook on life. It was like I could finally breathe."

She later met and married her husband, Brandon, and altogether they have four children: Hayes, 14, Holdyn, 13, Addalyn, 6, and Delta Blake, 3. They attend Pinelake Church in Brandon, Miss.

In 2016, VanGorder decided to transform a long-time hobby into a professional business. She started Whitney Jordan Photography. VanGorder had an interest in photography since her youth. She bought a used 35-millimeter film camera as a teenager and began taking photos as a hobbyist. As an adult, she would take photos of her children, which led her to decide to open her own business. Through her photography, she took ownership of her life in a way that she had not been able to do since the incident she had as a teenager.

"For a long time, I just never really felt like I had any control over my life. When I started my business, I felt like I was finally able to regain control and start pursuing something that would not only honor me but also honor God and have me out in the community," she says. "I'm using photography as a mission tool. ... I want to use my God-given talent of photography to spread God's love through my business."

Whitney Jordan Photography offers wedding, engagement and family photo services, although she is transitioning into being solely a wedding photographer.

"I enjoy getting to create memories for people—seeing the smiles on their faces when they see the pictures. I love working with people and getting to know new couples. That's what I love about wedding photography. It's such a good feeling to know that you're there capturing the memories that they are going to hold onto forever," she says.

"She has become such a really good friend to me, and I feel like I really owe her—and, of course, I really owe God—for all of my improvements and my achievements over the last six months," she says.

Now, VanGorder, 33, hopes to channel the struggles she has experienced throughout her life into a book, which is still only in the early stages.

"I'm wanting to encourage young women to step out and not be afraid to talk to somebody—because I didn't talk to anybody about my rape. I kept it all in, and it resulted in a lot of huge life changes."

In her spare time, VanGorder enjoys volunteering and being involved with her church. In 2015, she traveled to East Asia to evangelize to college students. Additionally, she and the rest of her family like to hunt.

For more information on Whitney Jordan Photography, or to review her existing work, visit whitneyjordan.co or find the business on Instagram or Facebook.