A Castle of Characters, Enchanting Memories 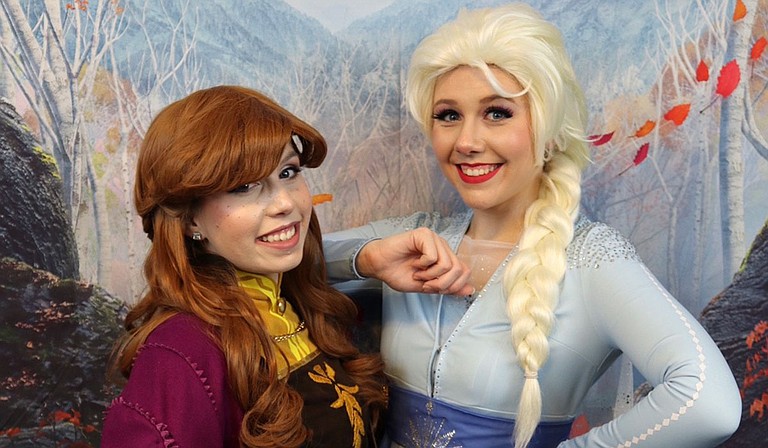 In 2015, Taylor Bridges found herself wearing glittery blue heels and a crystal-blue gown with powder blue sleeves, a semitransparent cape and white gloves as she stepped through King's Daughters Hospital in her hometown of Yazoo City, Miss. She had volunteered to portray the character Elsa from Disney's "Frozen" at a Christmas-themed "Princesses and Pancakes" event.

As she greeted guests, Bridges realized that she enjoyed dressing up and soon discovered the world of cosplay, which led her to attend Mississippi Anime Fest 2018 a few years later after moving to the Jackson area to work at Van's CCG.

"I kinda went to Anime Fest to check out the vibe, see what it was about, meet people within the community. And I was like, 'Okay, this is something I want to do,'" she reflects.

Thus, Bridges activated an Instagram account under her new handle, Taycosplayy. For her first year as a cosplayer, she largely purchased costumes before learning to construct them herself out of materials such as fabrics, foams and more.

Cosplayers like Taycosplayy often have what is referred to as "cosplans," which are lists of characters for whom they would like to create costumes, also known as "builds." Bridges says she often chooses characters on a whim and subsequently conducts extensive research into the characters—watching anime, reading manga or otherwise engaging in media featuring the character.

For Taycosplayy, costume-creation can range from 18 to nearly 150 hours, depending on the complexity of the characters' designs.

Her most popular characters tend to be ones from recognizable anime, such as "My Hero Academia," although the build that she holds the most pride in is of Chandra from "Magic the Gathering."

Bridges cites the friendships formed through meeting people at conventions as a prominent motivator for her continuing her cosplay career.

"The majority of the cosplay community is super positive," the 22-year-old says. "I've made life-long friendships and made memories through cosplay and attending events and fan-group meetups."

In October 2019, Bridges decided to bring her costuming skills to the next level and started her own business, Enchanting Memories Entertainment, which aims to bring fairytale and other fictional characters to life through costumes, which cast members wear to birthdays, fundraisers, corporate events, charity events and other occasions.

For EME's first gig, Bridges adopted the role of Anna from "Frozen," and she invited friend and fellow local cosplayer Christy Holt, who goes by Little MS Cosplay, to be the first actress in her company and attend as Elsa. In the few months following the event's success, EME grew from two actresses and two characters to 12 cast members and 25 characters in its "castle."

While COVID-19 may have slowed down business, the pandemic has not stalled Bridges' drive.

"I looked at the shutdown as an opportunity to build my castle of characters that we offer for parties. That was a good opportunity, to take advantage of the time and not let it discourage us as a business," she says.

EME has recently reopened but is implementing social-distancing and other safety precautions while working.

In the meantime, Bridges stays connected to friends and others in the cosplay community through social media.