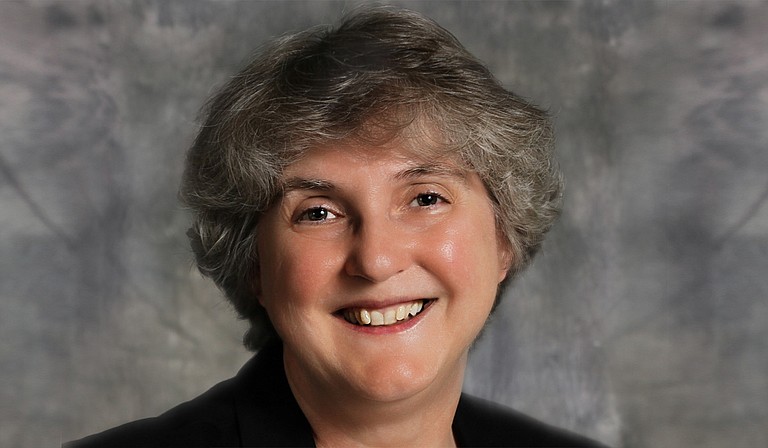 Sometimes, rather than selecting a profession simply because we need a job, some of us find ourselves answering what we discern as a calling. Sister Susan Karina Dickey discovered her path after adopting the Catholic faith, which led her to eventually hold her current position as the vice president of Mission Integration at St. Dominic Hospital.

Born and raised near Richmond, Ind., Dickey had a few stops along the way before landing in Mississippi. She left her hometown to attend Texas Lutheran University in Seguin, where she earned her bachelor’s degree in history. She then went on to Texas Tech University to complete her master’s degree in museum science. Afterward, she returned to Indiana and worked at the Indiana State Museum from 1979 to 1988, most of those years as a curator.

However, in the spring of 1988, she began to think it was time to steer her life into a new direction. She enrolled in Texas Tech again to earn her doctorate in history. Amidst her studies, while she had been raised Lutheran, Dickey converted to Catholicism in 1991. She finished her doctorate in 1993, the same year she first visited the Dominican Sisters of Springfield Illinois, which she entered in 1994. After a period of prayer and studying the faith, Dickey made her profession—her commitment—in 1997 with the approval of her congregation.

Initially afterward, she held part-time positions with Catholic colleges and universities in the Chicago area until 1999 when she became an archivist and historian for the Diocese of Springfield, which led to her working with the retired sister president of St. Dominic’s, Sister Josephine Therese Uhll. Dickey was brought in to write the narrative history of St. Dominic’s, which served as her introduction into the idea of health care as a ministry.

After obtaining a master’s degree in healthcare missions, which covered the theology of Catholic health care, she eventually found herself as director of Mission Integration for St. Dominic’s in 2008, later attaining her present title of vice president in 2014.

“I help my coworkers and our other stakeholders, board members and medical staff to remember that first and foremost we are a ministry of the Catholic church. We are not just another business. ‘We extend the healing ministry of Jesus Christ to God’s people.’ … We have to be intentional in remembering that underlying purpose,” she says, reflecting the mission statement of Franciscan Missionaries of Our Lady Health System, which St. Dominic Hospital joined on July 1, 2019.

More practically, Dickey’s position can be categorized into three areas: formation, teaching and contextualizing the hospital’s history and mission to help employees understand and act in ways that are consistent with the hospital’s core values; consultation, having a voice in operation and business decisions such as expanding the hospital’s emergency team during the pandemic; and guidance, advising doctors, patients and their families on decisions from the lens of Catholic ethics.

“One of the most rewarding things about my job is being able to work with other people who love what they do. It’s probably most visible right now because of the COVID pandemic and that our physicians and nurses, although very stressed throughout the country, are fully engaged in what they do, which is being of service to others,” she says.

Outside of her work with St. Dominic’s, Dickey engages in historical research and writing, now and then publishing scholarly articles. For fun, she also enjoys sacred harp singing, which is a style of a capella singing that comes from Appalachia, and sewing crafts that she can give away as gifts.