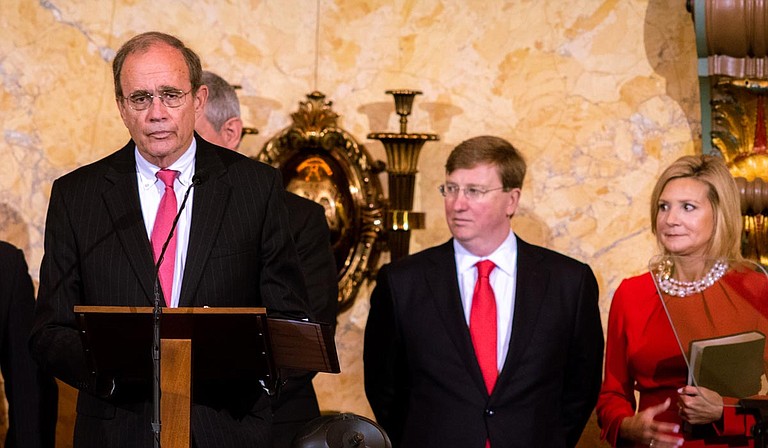 The centerpiece of Gov. Tate Reeves’ budget proposal is a phase-out of income tax in Mississippi by 2030. But Lt. Gov. Hosemann, who leads the Senate, is far from convinced. Photo courtesy Drew Dempsey

One month ago, Gov. Tate Reeves released his state budget proposal from quarantine, outlining his priorities for the coming legislative session. Most notably, Reeves called for an end to income tax in Mississippi, proposing a staggered elimination of both of the remaining brackets by 2030.

That suggestion quickly found support from House Speaker Philip Gunn, R-Clinton, long a proponent of doing away with income tax in the state. “We have been trying to find ways to develop a more solid, fairer tax structure,” he said earlier in the month.

But the proposal faces a rockier climb in the Senate, with Lt. Gov. Hosemann throwing cold water on the idea out of concern for state revenues. The Jackson Free Press asked Hosemann in an Dec. 14 interview if he supported the total phase-out plan, and how he expected to fill the $1.8-billion hole in the state budget it would leave behind.

“Your second question answers the first question. I don’t know that you need another statement from me,” Hosemann said. “It’s a $2-billion dollar question. I am open to any solution to that. But, until we have a solution … it’s not Field of Dreams. I don’t print money. We have to have enough funds to pay for highway patrol, education, all the other things we pay for as a state.”

Hosemann said that his agenda, in lieu of a realistic plan for such a massive tax cut, was to continue cutting redundancies in state government. “We abolished two state agencies this last (session) and shrunk a third one. … We deleted 4,119 vacant positions. I would love to find a way to replace that revenue with a meaningful plan, but in the interim I intend to continue to reduce the size of government,” Hosemann said.

The relative balance of tax burden is an issue for Hosemann. “Two billion dollars is very difficult to come up with a solution for other than raising some amount of tax in some other place,” he said. Attacking personal income tax would be the most economically regressive way to accomplish that goal.

A 2018 study from the Institute on Taxation and Economic Policy showed that only the top 5% wealthiest Mississippians pay a higher portion of their income share to income tax rather than sales tax.

The Jackson Free Press asked Lt. Gov. Hosemann if he could explain a tax burden distributed in this manner to his constituents. He answered with one word: “No.”

Other Mississippi senators had their own opinions on ending the income tax, but those contacted for this story uniformly agreed that a purely regressive approach to reducing tax burden was not a realistic proposal.

Sen. Brice Wiggins, R-Pascagoula, likes the idea of continuing to pare down personal income tax. “I think it’s good that the governor is putting that out there for the Legislature to consider,” he told the Jackson Free Press in a Dec. 16 interview. But the massive revenue cost has to be addressed first. “You cannot pull the band-aid off in one fell swoop. It would need to be a phased-in approach. It would need to be studied,” he added.

Just as importantly, Wiggins argued that any reductions to income tax would need to be balanced out by more progressive tax cuts. “We need to look at sales tax, property taxes, use tax. … The income tax is just one piece of the larger puzzle that is a part of the revenue,” he said. Such negotiations are never simple, in the senator’s experience. “You can’t just say ‘I’m gonna do this one.’ I saw that when I was chairman of (the Senate Medicaid Committee). If you make a cut over here, you affect something over there. I think we have to look at it as a whole.”

Wiggins considers balancing the tax burden a question of ethics as well. “We need to be looking at the tax on groceries just from a philosophical point. It is a regressive tax. That’s your necessities of life, and we’re taxing that,” he said.

Senate Minority Leader Derrick Simmons, D-Greenville, shares both Wiggins’ concerns about revenue and fairness. “We’d have to figure out how to maintain the level of state government that needs to be there to fund these vital functions and services to the people. That would all be at risk. I don’t support (the proposal),” he said in an interview.

“I’d be interested to see a proposal to eliminate the grocery tax,” Simmons said. “I’d like to see if that’s something Democrats and Republicans can look at together.”

Mississippi currently has three income-tax brackets, with no tax on the first $2,000 of taxable income, 3% on the next $3,000, 4% on the next $5,000 and 5% on all taxable income above $10,000. Both Gunn and Reeves, then lieutenant governor, were part of the successful 2016 effort under Gov. Phil Bryant to phase out the lowest tax bracket. The 3% bracket is scheduled to vanish completely by 2022.

Roughly $1.8 billion of the state’s revenue is derived from personal income taxes, part of $5.8 billion total from all state taxes, including sales, use and property tax. Those funds provide the majority of the more than $6.25-billion state support fund, the portion of Mississippi’s budget over which the Legislature exercises the most control.

Alaska, Florida, New Hampshire, Nevada, South Dakota, Tennessee, Texas, Washington and Wyoming have no personal income tax. For the majority of these states, revenues are propped up with significant property and sales taxes. Mississippi’s property taxes are comparatively low, at only .8%. Its sales tax is already in line with national averages at 7%.