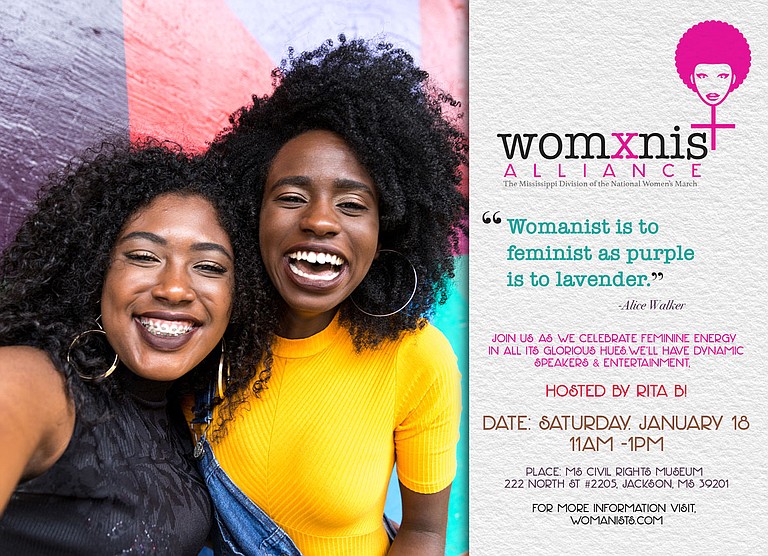 In 2020, women plan to stand together and unite by participating in the annual Women's Marches nationwide, with sister marches taking place in Washington, D.C., and other cities. The Womanist Alliance in Jackson has been building political power and cultivating Jackson's growing community of activists for the past three years.

The organization aims to propel forward with a progressive plan and renewed energy to push for policies that defend and protect women and that revolve around urgent issues that affect women's lives every day, such as reproductive rights, immigrant family safety and environmental preservation. The group plans to keep developing healthy relationships with veteran activists.

Talamieka Brice, a spokesperson for the Womanist Alliance, says that the most pressing issues crucial for this generation were brought to light by women. "In 2020, we will continue to play a pivotal role here in Jackson and nationwide, in facing those issues head on taking the power back," she said in a press release the organization distributed earlier this month.

The Womanist Rally will take place on Jan. 18 from 11 a.m. to 1 p.m. at the Mississippi Civil Rights Museum (222 North St., Suite 2205). The event is free to the public and focuses on celebrating the record number of women elected into Congress since 2018, holding seats in 25% of the Senate and 23% of the House. Comedienne Rita Brent hosts the event, which will include other speakers and entertainment.

"The most pressing issues of our time were brought to light by women," Brice said. "In 2020 we will continue to play a pivotal role here in Jackson and nationwide, in facing those issues head on taking the power back."