Home is Where the Robot Is: Kaz-Magic Studios 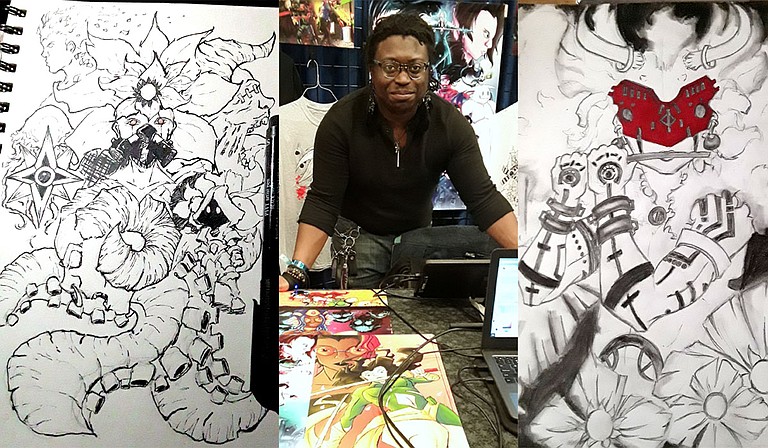 For Ridgeland resident Frederick Roseman, a freelance artist and local comic creator who uses the name Kaz-Magic Studios, the concept of family has been a driving force in both his personal life and in his artistic works.

Roseman says he felt like an outcast within his own family while growing up, only reconnecting with some family members once he had already come of age. Losing his mother to breast cancer when he was 13 years old amplified these emotions.

The Belzoni, Miss., native moved to the Jackson area in 2002 to attend Hinds Community College, where he studied graphic design. At Hinds, Roseman  befriended Jesse Sweat, whose mother  Robin Juve' welcomed the budding artist into their family.

"She really became a mom to me. As time has gone on, I have had other people who have made me a part of their family (as well)," he says. To this day, Robin still calls Roseman "Son," and he calls her "Mum."

This trend of finding surrogate families with whom he could be himself and feel loved and accepted continued as he furthered his education at the International Academy of Design and Technology in Tampa, Fla., before settling into Ridgeland and building Kaz-Magic Studios. Roseman now claims six separate families as his own, although he is currently building relationships within his immediate family.

"It doesn't matter where you came from, what you are or what you have done in your past. You can have people who accept you as family," he says.

These themes of family and finding acceptance in those who may not be one's blood relations are found within one of Roseman's current comic books,  "Unit C7." In this comic title, a robot designed as an instrument of war for the fictional world's government crash-lands in front of two young girls, 16-year-old tech genius Collete and 6-year-old Sophie.

For some reason, this robot, Unit C7, rebels against his programming and decides to rescue the girls from an attack by another robot. As a result, he is forced to live as a fugitive while serving as the girls' protector, and he begins to learn the values of humanity and the merits of human life.

"When I was growing up, I wanted to be accepted for who I am. That was a big deal to me. That's why the whole word of family comes to play in 'Unit C7,'" he says. "Unit C7 may be a robot. He may be animatronic. He may not have human emotions. But they learn to accept him, and that's why, to them, he is a beautiful creature on the inside."

Roseman, 35, formulated the concept of Unit C7 himself and published a prologue on Webtoons that focuses on one of the main characters, Colette, prior to the events of the first full-length issue. He now is working with a team to publish the comic title through 123 GO Publications, through which Roseman recently published his first comic for print, "Gunmetal Black Ops," which stars two female assassins.

Webtoons also hosts the first webcomic that Roseman created, "Hybrid Children," which features children who have had their genes spliced to give them extraordinary abilities. He hopes to publish the title as a three-book series with 123 in the future.

In addition to creating comics, Roseman connects with fans of Kaz-Magic Studios by hosting live-streaming events through Twitch, YouTube, Facebook and Picardo TV. During the streams, the artist gives his thoughts on his hobbies, his craft and other topics, occasionally while bringing in guest artists or while starting and finishing a drawing from scratch.

“My whole purpose of live-streaming … (is) to inspire as many as people as possible, give them the courage to put themselves out there to accomplish whatever goals they have in mind,” he says.

While he had taken a break from live-streaming for a short while, he is preparing to resume them in full stride, with a new series called “Creative Underground.”

To interact with people in person, Roseman often attends Jackson-based conventions like Anime Fest and Mississippi Comic Con as a vendor, where he sells art prints, T-shirts and copies of his comic books. Working in the service industry as his day job has sharpened his interpersonal skills, he says, allowing him to engage with all visitors, even when his booth is surrounded by about a dozen people at once.