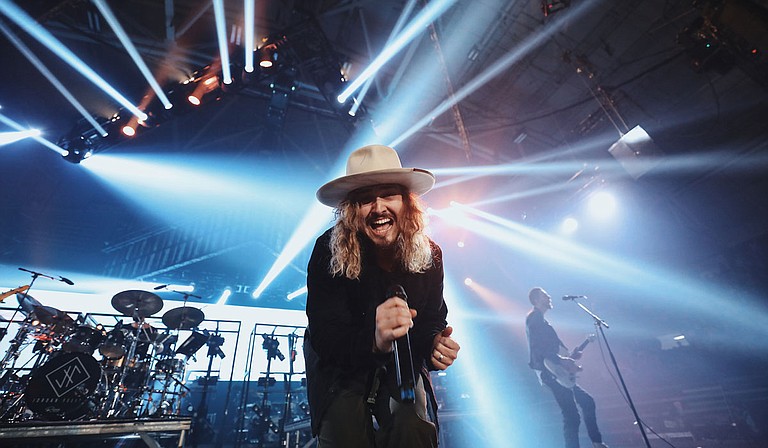 The foundation for Christian music artist Jordan Feliz' professional solo career began to culminate only five hours after he and his wife moved to Nashville in 2012.

He and a friend had been unloading the van and trailer Feliz used to move and grew exhausted, so they decided to make a Starbucks run, which unexpectedly changed his life. As they exited the business' door, a woman called out to them, "Hey, you guys look like you're in a band."

Feliz' friend explained that Jordan had just moved to the area to be a solo artist and began hyping him up. When the woman asked Feliz what type of music he performed, he responded by saying he felt called to be a Christian artist in Nashville, which made her perk up. She revealed that she was Jennifer Deibler, who was the lead vocalist for Far From Home, a popular Christian band that formed during the '90s.

Giving him her email, Deibler asked for a demo. Three months later, Feliz began receiving calls and emails from record labels who had listened to the demo Deibler sent around. After three more years of working as a songwriter for other artists and as a parking valet, Feliz signed on to Centricity in 2015.

His first single "The River" hit the radio in July 2015, with his first album "Beloved" releasing that October. The record took off and ultimately skyrocketed his career, as he began touring in January 2016. Feliz called the album's success a financial blessing, pulling his family above the poverty line.

"On a spiritual level, it just made us really trust God, because we just definitely could not have trusted ourselves," he says. "We just really started praying about what was next and what God was calling us to do. It enabled us to really listen more and have faith that He was going to be our provider."

He has released two more albums since then, his most recent being "Future," which he says centered on "reminding people of where their future is found and who holds it."

"The moment we place whatever we have in the hands of God, that is where we find true freedom. That's where there is no anxiety, no stress, no fear," Feliz says. "Where Jesus is, there's peace. That's really what I wanted that record to stand for."

Feliz' own faith originated from his youth. Born and raised in Clovis, Cali., he attended church with his family all his life, dedicating himself to Christ at age 8 and rededicating at age 17. His career in leading others in worship began after his youth minister, Pup, encouraged him to lead his youth group's morning worship. Initially a drummer, Feliz developed a passion for singing in praise.

"I can't believe I get to (lead people in musical worship) as a job. It's pretty incredible," he says.

At 17, he joined A Current Affair in 2006, a heavy metal band made up of Christian members. After graduating from Buchanan High School in 2007, he spent a few years with the group before it elected to dissolve so that members could pursue other endeavors. Feliz took on a job as a worship leader for a local church for a few months before a good friend of his who had been working in Nashville convinced him to fly out to try his hand at professional songwriting, which led to the move in 2012.

"She's like my second lifeline (after Jesus). She's amazing. She's the best mom. She's the best wife. She's just the best supporter," he says. "I'm so incredibly grateful to have her in my life."

Jamie, a Chicago native, entered his life when they were both 15 and their families decided to incidentally go on vacation in Phoenix, Ariz. The two met at the pool and had brief 10-minute conversations the first couple days of vacation, but on the third night, the hotel held a film screening for kids at the pool. Feliz and Jamie got together and talked throughout the movie, asking about each other's backgrounds, interests, passions, music preferences.

"I really feel like that night we actually fell in love, and I know that sounds crazy, but we really did," he says.

For the rest of the week, the two were inseparable. Before they departed, Jamie wrote on a piece of paper—that they now have framed in their house—that one day she was going to move to California and marry him.

They dated long-distance for five and a half years, talking to each other nearly every night on the phone. Sure enough, as prophesied, Jamie moved to California. A year later, the two were engaged, and a year after that, they married in 2011.

Now and then discouragement pricks at his heart, but Feliz continues to retain a positive attitude.

"When you get discouraged or are struggling, I think the quickest thing that will kickstart your mind and heart again is reminding yourself what this is all about," he says. "I think (discouragement) comes from our own human emotions, stuff we put on ourselves or think we need or need to achieve, and ultimately reminding myself that the only reason I am here is to tell people about Jesus—that's really what encourages me. That's my purpose in all of this, and if that's being achieved, then I have nothing to be discouraged by or to struggle with."

Watching people grow in their relationships with God and trusting Him more is Feliz' primary motivation, he says.

Today, March 12, Jordan Feliz performs as part of the "TobyMac Hits Deep" tour at the Mississippi Coliseum (1207 Mississippi St.) starting at 7 p.m. Tickets range from $10-$50 and can be purchased here.

"It's such a great tour. It's an amazing community, on and off the stage. Going into it for us is all about creating a culture and continually reminding people and telling people about Jesus," he says.

Moving forward, Feliz has a single set to release in May with a full-length album to come out within the next year. Outside of music, Feliz most enjoys spending time with his family and also likes to snow-ski and drive his UTV.

To learn more about Jordan Feliz and his music, visit jordanfeliz.com.