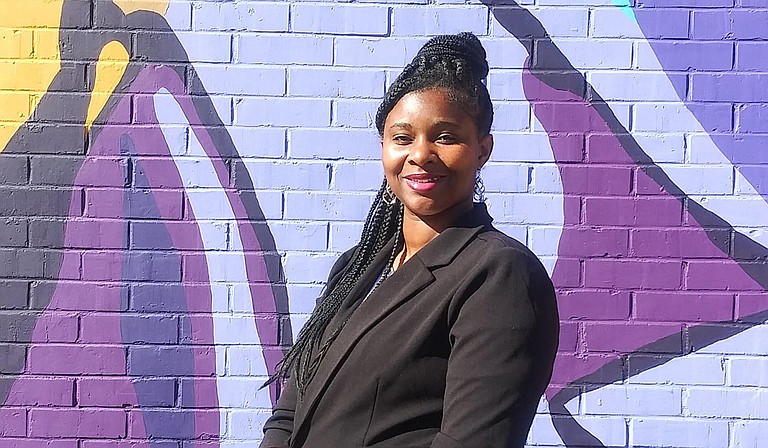 When Gwen Wilks saw an advertisement for a position at the Mississippi Museum of Art that suggested she would "learn about herbs and fresh vegetables," she assumed the position would include working in the community garden. "I get to the interview, and that interview had nothing to do with the community garden. It had everything to do with working as a server at the cafe. So that's where I began, in the cafe," she says with a launch.

The Palette Cafe closed in 2017, leading Wilks to move among departments, helping where she could and gaining experience all the while.

"With my wheel and desire to learn more ... I didn't mind—that's just my personality," she says.

Less than a year later, Wilks began working as events facilitator with a dual role in visitor services. As of this month, she now holds the position of events coordinator. In the communications-heavy role, Wilks greets guests, meets with clients, and organizes both public and private events held at the museum.

"In life, it's about the relationships you form," the Jackson  native advises. "What I love most is getting an opportunity to meet people and engage with them."

Wilks grew up in Jackson until her family relocated to  Pelahatchie during her high school years. After graduating from Pelahatchie High School, Wilks had her eyes set back on returning to her hometown.

"Jackson State was calling me, and I was ready to go. When I left Pelahatchie, I had skates on. I loved Hinds County," she says. Wilks earned a bachelor's degree in accounting from JSU in 2005.

Outside of the museum, Wilks enjoys engaging with and giving back to her community. She presently serves as president of the PTA for her daughter's school and on JPS School Reopening Advisory Committee, and she has also served on the Hinds Headstart Policy Council.

"I'm a volunteer at heart. I'm always happy to lend a hand," Wilks says. "Anytime there are community events, I'm probably there to lend a hand. I don't have any reservations about my volunteerism."

Wilks has been married to her husband, Michael, for nine years, and they have a daughter, Micaela. In her spare time, Wilks likes when she and Micaela explore Foot Print Farms with Dr. Cindy Ayers Elliot, citing that they have learned much about plants and produce and that Micaela likes to eat mint straight from the garden as a result of their adventures.