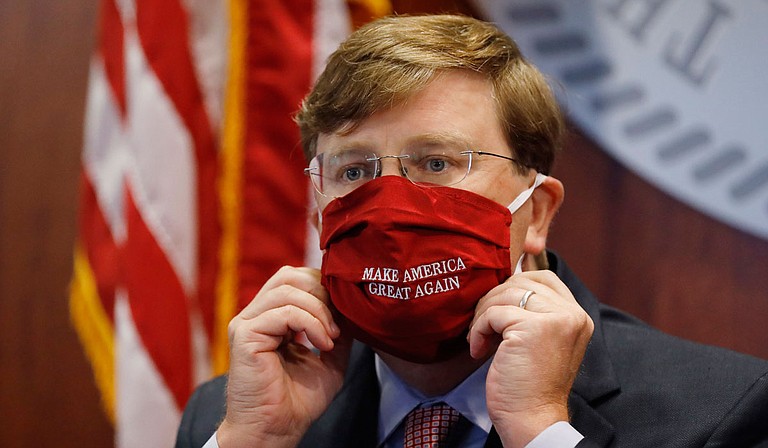 "Gov. Tate Reeves has done precisely the wrong things to quell this virus. He could have led his party and supporters in Mississippi instead of sheepishly kowtowing to the extremists." Photo by Rogelio V. Solis via AP

If there's one lesson this wretched year has taught us, it's that denial isn't an effective governing strategy. For instance, denying that you lost an election—by tens of thousands of votes in swing states and 6 million votes nationally and then crafting bald lies about voter-fraud claims—hasn't worked.

Deniers have flung denial far and wide this election, and the most likely outcome is a further weakening of democracy in America with thanks, as always, to Donald Trump.

Denial is also ineffective against COVID-19. Gov. Tate Reeves has done precisely the wrong things to quell this virus. He could have led his party and supporters in Mississippi instead of sheepishly kowtowing to the extremists. He could have listened to science. He could have told people in no uncertain terms to make some sacrifices, stay out of big groups, and wear a damn mask.

But Reeves didn't do any of those things because he refuses to lead. We're now at nearly record numbers of COVID-19 cases here, with hospitals at capacity. Flu season and the holidays are underway. A lack of discipline, courage and leadership squandered any "virus dividend" we may have had after our summer virus peak.

This week, Dr. LouAnn Woodward of UMMC called for Reeves to reinstate the mask mandate to combat the crisis our health-care workers are once again facing in the state. I hope to hear he has done it before Thanksgiving. Lead, Tate. And stop licking Trump's boots.

Reeves In Denial: The Solution to Racial Tension Isn't Propaganda

In his executive budget recommendation for this year, according to Nancy Loome of the Parents' Campaign, Gov. Reeves hasn't proposed a single cent in pay raises for teachers, despite promising raises in his 2019 campaign. He did propose moving $3 million from public-education funding to create a "Patriotic Education Fund," which gets a paragraph in his 102-page document. He explains that: "Capitalism, democracy, and other uniquely American values have been the victims of a targeted campaign from foreign and domestic influence—aiming to destroy the pillars of our society."

Whether the 3 million bucks will go to programs that talk about sitting presidents offering up wholesale lies to try and overturn a legitimate election—you know, trying to destroy the pillars of American society—isn't clear.

TheHill.com seems to suggest this is just another instance of Reeves doing what Trump wants, given that the outgoing president established an "Advisory 1776 Commission" by executive order this year that looks to be a typically Orwellian reaction to the racial reckoning and protests against police brutality this summer. Trump's order reads that "... many students are now taught in school to hate their own country, and to believe that the men and women who built it were not heroes, but rather villains."

Reeves takes a less circuitous route, calling his proposal the "Patriotic Education Fund," making it clear that the point is to toss $3 million at rank propaganda in the public schools.

His budget also proposes to force school districts to return to the classroom to maintain their state funding. Virus be damned, what's important to Reeves is to make sure he keeps beating the Trumpian drumbeat of returning kids to school no matter who pays the price—teachers, grandparents or the students themselves.

Reeves In Denial: Holding Back Medicaid Expansion Holds Back Mississippians

In his budget proposal, Tate Reeves makes clear, once again, that he's against expanding Medicaid, which according to his own numbers would give an additional 300,000 people in Mississippi basic medical coverage.

In March 2020, the Kaiser Family Foundation, or KFF, published a literature review of Medicaid expansion studies in the 10 years since the ACA passed. They found that "[m]ost research demonstrates that Medicaid expansion has improved access to care, utilization of services, the affordability of care, and financial security among the low-income population."

KFF also found that Medicaid expansion reduces the burden on hospitals and clinics that care for the uninsured. Since the ACA Passed, Medicaid expansion improved needs like access to medications for behavioral health, health-care providers' financial stability and employment.

"Looking back on 10 years since the ACA has been enacted shows that the Medicaid expansion has expanded coverage and led to increases in access and utilization to health care services, improvements in financial security and positive net effects for state budgets and revenues," the report says.

Reeves' approach? Denial. "I remain adamantly opposed to Medicaid expansion in Mississippi. I firmly believe that it is not good public policy to place 300,000 additional Mississippians on government-funded health care," he stated in his budget.

The governor then disingenuously writes that Medicaid expansion could cost Mississippi $220 million per year, which could be used to give "every teacher in the state" an annual $4,330 raise.

What Reeves does propose is eliminating Mississippi's income tax, representing about 34% of our revenues. (I guess that's where the teacher raises go.)

Presumably, Gov. Reeves' team wrote most of this budget before it was clear Trump had lost the election. Here's hoping Reeves gets off the Trump denial train, and instead focuses on governing the state as his own man.

Mandate masks, work to support workers and small businesses through this next wave of the pandemic, fully fund public schools, and let's finally fix health care in Mississippi.

Take on those very real challenges for Mississippians, Gov. Reeves, and you'll have a good start on a post-Trump legacy based on decisive action and leadership, not denial.

Todd Stauffer is the president and publisher of the Jackson Free Press.