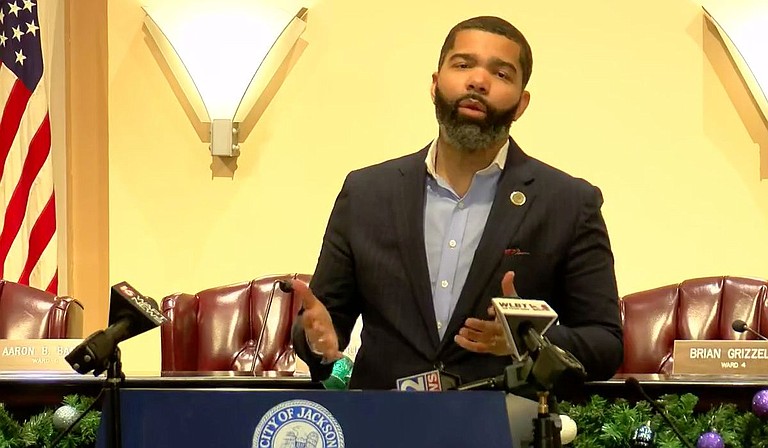 Mayor Chokwe A. Lumumba said during a press briefing on Dec. 13 that the City will pursue all resources to improve the condition of the water and sewer infrastructure. Photo courtesy WLBT

City of Jackson officials have appealed for fairness in distributing the nearly $75 million in water-infrastructure funding that Mississippi is getting in 2022 from the Infrastructure Bill that President Joe Biden signed into law in November.

In response to the announcement of the available financing, Mayor Chokwe A. Lumumba stated during a press conference on Monday, Dec. 13, that the ball is now in the hands of the state's leadership to guarantee that the capital city receives its fair share. He did, however, emphasize that whatever funding the city gets from the fund will be far from sufficient.

During two consecutive February snowstorms that affected the city's water delivery, the mayor stated that restoring the city's infrastructure requirements, including water-infrastructure maintenance, would cost $2 billion. Mississippi will get $459 million of the $55 billion in water infrastructure funding included in the $1.2 trillion Infrastructure Act.

"We simply want to be sure that the city of Jackson gets its equitable share of those resources—its fair share," Lumumba said Monday. "I want to temper expectations amongst our residents that the money that we will receive out of this infrastructure package is not sufficient in order to repair all of the challenges, all of the issues that we have with our aging infrastructure, but it is much-needed support."

"I want the residents to be assured that the city of Jackson will look high and low for every available resource in order to address our aging infrastructure."

Before the announcement of the $74.9 EPA funding in a press release on Thursday, Dec. 2, Environmental Protection Agency Administrator Michael Regan visited Jackson in November and learned firsthand from residents about the impact of the city's aging water system.

"With President Biden's leadership and congressional action, the Bipartisan Infrastructure Law has created a historic opportunity to correct long-standing environmental and economic injustices across America," Regan said in the press release.

The EPA mentioned Jackson in the statement and noted that the Bipartisan Infrastructure Law offers an opportunity for states to correct disparities in access to the funds by vulnerable communities.

"Communities such as Jackson with critical water infrastructure needs will be encouraged to apply for this new funding," the EPA said. "The 2022 allocation is the first of five years of $43 billion in dedicated EPA (State Revolving Fund) funding that states will receive through the Bipartisan Infrastructure Law."

"For more than 30 years, the SRFs have been the foundation of water-infrastructure investments, providing low-cost financing for local projects across America," the EPA added. "However, many vulnerable communities facing water challenges have not received their fair share of federal water-infrastructure funding."

"And we know that the need is here in the capital city, and so we'll continue to do our part," he added. "We will hope that the entities themselves will continue to work with us while we work through these challenging infrastructure issues with the city."

Lumumba on Monday referenced a letter that EPA Administrator Regan sent to Gov. Tate Reeves on the day of the announcement of the funding. Regan charged the governor to target the incoming resources from the infrastructure bill to disadvantaged communities and mentioned Jackson as one of such.

"For too long, these communities have been left behind by both federal and state governments," Regan wrote. "From Jackson to Houston, New Orleans to St. James Parrish, environmental-justice communities are concerned that they will be shut out of accessing water infrastructure funding from the SRFs."

"States and the EPA can and must do better with the Bipartisan Infrastructure Law."

Lumumba enjoined that the distribution of the money should be beyond partisan consideration.

"We know that the EPA sent a letter to state leaders, and it specifically named Jackson as a city that you know is in need of these resources and should be addressed," he said. "And so hopefully, we understand that addressing Jackson's aging infrastructure is more than a matter of politics."