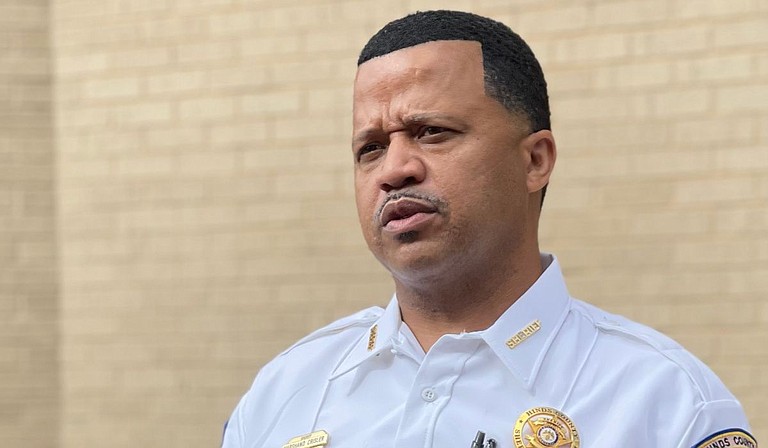 Former Hinds County Interim Sheriff Marshand Crisler said that he is disappointed that Hinds County Circuit Clerk Zack Wallace rejected his request to examine the election boxes for the Nov. 23 special runoff election. He lost by over 5,000 votes to Sheriff Tyree Jones in that election, based on certified results. Photo by Kayode Crown

Former Hinds County Interim Sheriff Marshand Crisler requested to examine the election boxes in a letter hand-delivered to the Hinds County Circuit Clerk Zack Wallace on Wednesday, Dec. 15, 2021. Wallace, however, rejected the request in a letter on Thursday, Dec. 16, because it "does not comply with the statute."

In a telephone interview with the Jackson Free Press on Sunday, Dec. 19, Crisler said that he was not pleased with the circuit clerk's decision, saying that he sought guidance from him before he sent the letter.

"I was given a date by Circuit Clerk Zack Wallace (who said) that (I should) file my request in by a certain date, which I was (told was) Dec. 15," Crisler said. "After I had submitted it by the deadline, it was determined by the circuit clerk that he gave me the wrong date, which obviously is problematic for me."

"At this point, I'm just weighing my options; (I am) certainly not pleased with the outcome," he added. "I'm just kind of weighing in what my recourse is because I did what I was asked to do in good faith and thought that the request should be honored."

Crisler copied Sheriff Jones in the Dec. 15 letter to the circuit clerk. In response, Jones said that the timeline provided by the Mississippi statute guiding election box examination on which Crisler based his request is past due and requested that the circuit clerk not grant it.

"According to the language in MS Code 23-15-911 a candidate has twelve (12) days from the date of an election certification to conduct a box examination and the opponent must receive correspondence reflecting this request from the requesting candidate within three (3) days," Jones wrote in a letter dated Dec. 16.

"The runoff election was certified on December 3, 2021. Based on the date of the certification of the election and the date of which this request was served, the twelve (12) day period to conduct a box examination had expired. Furthermore, serving the request on the 12th day of the process does not align with the three (3) day notice that should be afforded to the opposing candidate of the intent to do a box examination."

Then-attorney general Mike Moore explained that a candidate must complete the examination of election boxes within 12 days from election certification.

On Sunday, Crisler told the Jackson Free Press that tales of missing media sticks and last-minute scrambling to deliver voting machines to precincts raise questions about the election's validity.

He said that it is the right of candidates to examine the election boxes after an election to ensure its integrity and keep election officials accountable.

"It was simply an examination of the box, which is a basic right of every candidate who decides to avail himself to public office," Crisler said. "It's a right to look at the box and to make sure that the information was calculated and tabulated correctly."

"We had a lot of civil irregularities that went along with this particular election," he added. "So anytime you see irregularities, you want to make sure that none of them compromise the process."

However, District 1 Election Commissioner Kidada Brown told WLBT in a report on Dec. 15 that she was unaware of any irregularities and received no information about such from constituents during the runoff. "We followed all procedures to close out the election," she said.