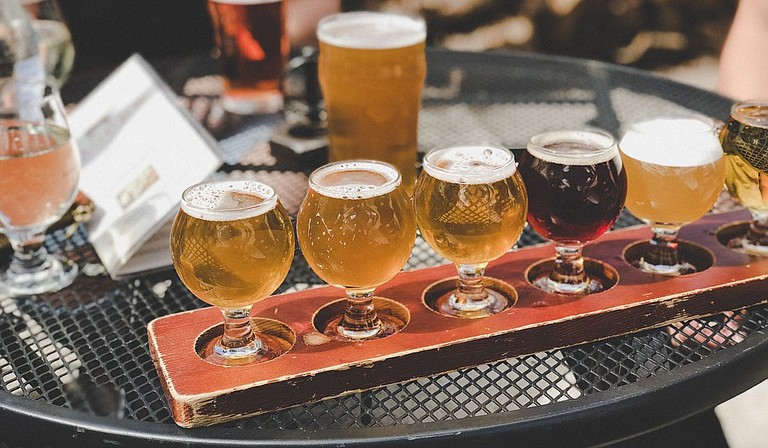 Drinking cold craft beers across Mississippi is one way to get out again. Photo courtesy Tatiana Rodriguez on Unsplash

Here at the midpoint of 2021, I feel hopeful. Yes, I wish more people would get vaccinated against COVID-19—and, yes, there’s a disturbing variant that could affect the unvaccinated and their loved ones harshly. But things are opening up for those of us who have been vaccinated—and I’m excited.

Donna Ladd and I have been driving all around the state throughout the pandemic. We’ve seen more of the Magnolia State in the past year than we’d seen in the previous 20 years. I’ll be honest—a lot of this state is in shambles. It’s striking to see the poverty all along the highways and in the crumbling downtowns and town centers. The rings of suburban prosperity around those towns—out near the newest WallyWorlds and “upscale” Dollar General Markets—are often right around the corner from where the defiant, low-slung, aluminum-clad segregation academies squat in every county we’ve visited.

Here on the first anniversary of the old flag coming down, driving Mississippi reminds you of all of the integration work that white Mississippians have yet even to attempt. Taking down the flag and statues is just table stakes.

But, the trips have been cathartic and educational for us, and a good way to get out of pandemic shelter at the house and home offices. Now, we’re even talking about travel outside the state again.

As you’ll see in this issue, there’s finally a lot to do inside and outside of Jackson again. In our calendar, you’ll see more concerts, events, museums, and other venues opening up and welcoming us in. And—spoiler alert!—this month, we’re rolling out an all-new events calendar at JFPEvents.com as we gear up toward post-pandemic R&R in the Jackson metro.

If you’re looking to take a trip yourself—but closer to home—Nate Schumann offers a Mississippi Breweries roundup this issue looking at all the fine beer you can sample here in the Magnolia State.

This issue also offers our Best of Jackson 2021 Household Services winners, allowing you to celebrate and learn more about the folks who help us with construction, roofing, HVAC, cleaning and so much more here in the Jackson metro. As we’re allowing more folks into our homes again, you can call up some of the best that Jackson has to offer and sign them up for a little home improvement!

Speaking of awards, this month marks the nomination ballot for Best of Jackson’s Lawyers and Law Firms for 2021. Visit vote.bestofjackson.com now to nominate your favorite lawyers and law firms in a variety of categories. Those who get the most nominations will move on to the Finalist ballot next month, so let the campaigning begin now!

And still speaking of awards, June was a great month for the Jackson Free Press, as our staff’s work in 2020 won five awards in the Diamond Awards (Arkansas Society of Professional Journalists, covering six contiguous states). The staff also got six nods in the Green Eyeshade Awards, covering 11 states in the southeastern U.S.

Nick Judin, now a state reporter for the Mississippi Free Press, won first place in four different categories in the Green Eyeshade Awards, including the Public Service in Non-Daily Journalism award for his body of work on the pandemic in Mississippi. He also won for Feature Writing, Politics and Disaster Coverage. In the Diamond Awards, Nick won second place for non-daily Breaking News and Ongoing Coverage, both for his COVID-19 work.

City Reporter Kayode Crown won first place for his explanatory reporting (non-daily) on the science and perils of road paving here in the Diamond Awards and third place in Outstanding New Journalist, an honor that the SPJ awards across all sizes and types of media.

“The amount of detail Kayode Crown puts into his stories is impressive,” the Diamond Award judges wrote. “That exemplifies a passion for reporting and writing that easily connects with readers. Plus, there’s always context provided about what impact a story has on the community. These important traits are evident now and will be well-used in the future.” He also won second place in Courts & the Law Reporting (non-daily) for his work on policing mental health and public safety.

Founding Editor Donna Ladd won first place for Commentary (print and online) in the Diamond Award and first place in the Green Eyeshades for Serious Commentary (non-daily) for her Editor’s Notes on Covid leadership and facing racism.

Meanwhile, former JFP staffers at the Mississippi Free Press (the nonprofit news outlet Donna and Kimberly Griffin started in March 2020) did so well in the Diamond Awards that the press release opened up with them as the biggest winner.

The MFP team won the Robert S. McCord Freedom of Information Award for their work on the University of Mississippi email series, and Ashton Pittman won Diamond Journalist of the Year.

In all, it’s 11 nods for the Jackson Free Press and 18 for the Mississippi Free Press across both contests. Congrats to all the winners, including others in Mississippi and throughout the Southeast.

We’re proud of the entire team holding down the fort at the Jackson Free Press as Donna has shifted to the MFP, from Managing Editor Nate Schumann to Art Director Zilpha Young; Associate Publisher Kimberly Griffin (now part-time here) to Online Editor Dustin Cardon; Reporting Fellow Julian Mills to Distribution Coordinator Ken Steere. And a special shoutout to Editorial Assistant Shaye Smith, who has been heavily involved in the aforementioned calendar revamp, and Content Specialist Amber Cliett, who does excellent work for our JFP Digital Services clients in social media and online.

Be safe, first and foremost, but if you’re vaxxed up, July should prove to be a fantastic time for reconnecting with one another and the world. See you out there!

See jfp.ms/awards for a list of all 155+ JFP honors since 2004. Email Publisher Todd Stauffer at todd@jacksonfreepress.com.