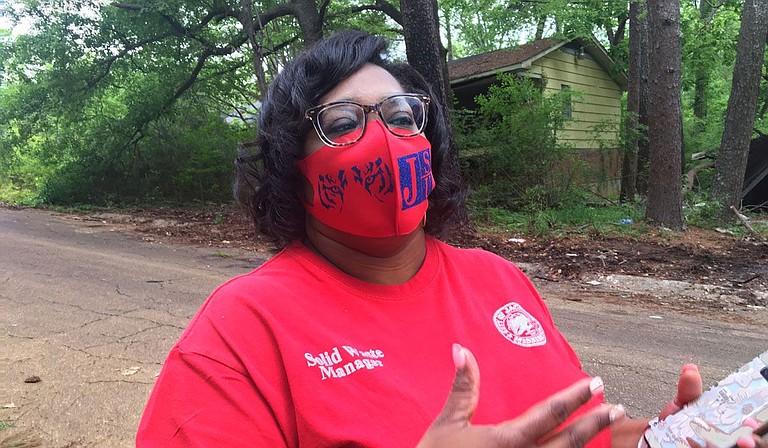 It will take a city-wide cleanup effort to move the needle against the menace of illegal dumping in Jackson, Solid Waste Division Manager Lakesha Weathers told the city council at its meeting on Tuesday, Sept. 14.

"We are planning a city-wide cleanup, and we're going to need all of y'all’s support. Bring your people, bring your resources because just hitting one area at a time is not getting it. We're going to have to hit it all at one time and clean up the city," she said. She did not announce the date for the effort.

Jackson City Council Vice President and Ward 2 Councilwoman Angelique Lee said at the meeting that she wants the City to explore closing Hilda Drive to curb illegal dumping. Weathers said the same phenomenon is seen in other parts of the city and named Michael Avalon Street, Capers Avenue, and Glen Erin Street.

Director of Planning and Development Jordan Hillman said she will look at Hilda Drive with the public works department and see if it is possible to close it off. In April, Weathers told the Jackson Free Press that the road is a frequent spot for illegal dumping.

"I think you have, like, for example, contractors that might come out of Edwards, Mississippi, and clean up something in south Jackson, and they don't want to drive down towards I-55 (where the City's disposal site is) or drive anywhere else," he said. "They just go to Lake Shore Road and dump it off and go right back to Edwards."

The City of Jackson owns and operates a Rubbish Disposal Site at 6810 I-55 South Frontage Road in Byram. The disposal cost ranges from $25 for a regular single-axle trailer load to $150 for a tandem-axle truckload, Weathers said Tuesday.

Banks said having a more accessible disposal site may be a solution. "I think if there were some access points that were easier, we might mitigate that a lot better," he said.

Weathers said that instead of using illegal dumping sites, people can place items curbside. She laments that her department only has one truck operator picking up illegal dumping in the city.

"A lot of the stuff that we're seeing at these illegal dumpsites can be placed at the curb—household debris, like furniture, mattresses; we see mattresses all over the city," Weathers said. "So those things can be put out with your regular household garbage, and they can contact solid waste (department) at 601-960-1193, and we can explain to them how to place those things at the curb for collection."

The manager said that the City’s landfill is authorized to receive construction and demolition debris. "A lot of the things that we're seeing at these sites wouldn't go to our landfill anyway," she said. "We don't take paper and plastic for instance.."

Weathers charged citizens to patronize only registered cleanup contractors. "I do believe that the citizens have a responsibility in this because they need to make sure that they are hiring certified contractors," she said. "Because if you go to Hilda Drive, you see that a lot of that stuff out there is contractual, you know, you have whole wheels of wire out there."