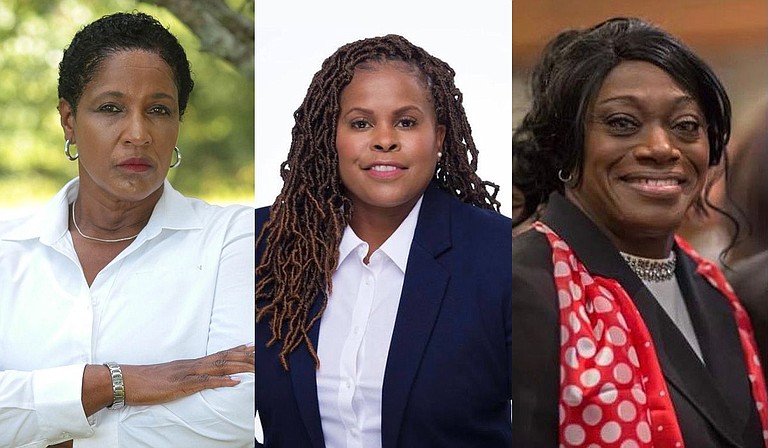 Cheryl Matory, Beverly Harris-Williams and Colendula Green are among the 13 candidates running for the Hinds County sheriff’s position in a special election on Nov. 2. Former Sheriff Lee Vance died in August after testing positive for COVID-19. The winner of the special election will serve until 2024.

In August, the Hinds County Board of Supervisors appointed Marshand Crisler as interim sheriff. He is also running for the position.

“In 2003, I moved to the Jackson police academy as a training coordinator,” she said.

She moved to the crime-scene division in 2008. In 2015, she became undersheriff in Hinds County, under the leadership of the late Sheriff Victor Mason. She works now as a police officer at the University of Mississippi Medical Center.

"My priorities would be first to the Hinds County jail and to make sure that we're abiding by the standards of policies of the (U.S.) Department of Justice," she said in the interview.

Matory said that her priority as sheriff will include crime-fighting and mental health, focusing on the mentally ill and homeless.

“They're very good ideas, (but) I don't want to give a heads up on them just yet,” she added. “I have ideas to help reduce crimes within Hinds County, and we also need to focus on our children and our young people and programs which will help them not to have an idle mind, to have something more positive to grasp for and look forward to something positive in the future for them."

She served 10 years as an officer with the Jackson Police Department, where she was a police instructor, personnel officer, recruitment supervisor and field supervisor. She also served in the United States Army for 13 years.

Harris-Williams joined the FBI as a special agent in 1997 and worked at the Jackson Field Office as the first African American female assigned to the division. In 2011, she became a supervisory special agent at the FBI headquarters.

"I was later selected as the assistant chief of the FBI police. Within weeks of reporting, I was assigned as the interim chief of police. I was the first female/African American to serve in both of these roles."

Harris-Williams later became assistant chief of the FBI Police in Washington, D.C., and soon after as interim chief of police, becoming the African American female to lead that security force.

She later moved to the Dallas, Texas, office as a special agent and later became a supervisory agent. She retired in 2017 after 31 years as a law enforcement officer and is now a co-owner of Lanewood Realty, LLC.

"My candidacy represents ‘change.’ Hinds County voters have openly voiced their displeasure with the status quo. As sheriff, I will utilize my extensive experience and training to effect change. I will leverage technology to advance and implement new innovative strategies to keep our community safe," Harris-Williams added in the email statement. She said she will develop programs to address reentry for inmates and increase deputies.

Harris-Williams listed her priority issues on her website. They include increasing deputies' presence within Hinds County and surrounding rural areas, increasing community engagement, restoring public trust and partnering with others to fight crime. She also wants to decrease the pre-trial backlog in Hinds County Detention Center. The Jackson Free Press reported earlier in the month that many detainees in Hinds County spend years in jail without trial due to numerous reasons.

Though born and raised in Michigan, Colendula Green has been in Hinds County for 25 years, 17 of those in law enforcement, she wrote in an email statement provided to the Jackson Free Press on Friday, Sept 24.

She graduated with a degree in criminal justice from Jackson State University. "I have been a Background detective, property crimes detective, law enforcement peer support officer, crisis intervention officer, and public information," she wrote. "I am a certified police instructor at the Jackson Police Department Police Academy and also a certified mental health intervention instructor as well."

"It would be used to house female inmates, quarantine covid-positive inmates, and also hold persons charged with misdemeanor crimes in the county," she wrote. "As for building a new jail, I honestly believe we can save taxpayer dollars and still use the current jail. The key is to go about making repairs in a way that doesn't allow the inmates to damage it as soon as the repairs are finished, like what happened last year."

She wants to ramp up hiring to have three deputies in each zone at every shift to more effectively cover the county's unincorporated areas while also assisting the cities. "There are six patrol zones under HCSO jurisdiction. I want to increase patrol deputy numbers to the point that we have 18 deputies working every shift in patrol."

Green said she is passionate and willing to make the Hinds County Sheriff's Office a world-class department.

"Many candidates tout their experience, and in the past, we've always elected someone with experience, but it seems like we never elect people with new and fresh ideas to move the department forward," she wrote. "Somehow, we always end up with a different version of the previous administration. They say insanity is doing the same thing but expecting a different result."

View more stories about 2021 elections and candidates at jacksonfreepress.com/2021elections.