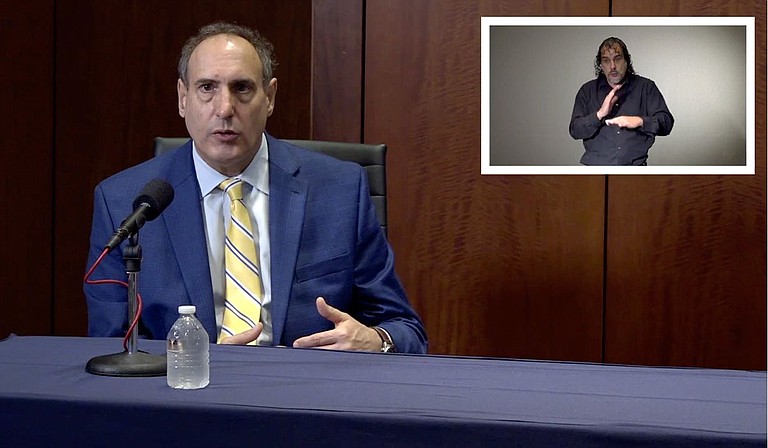 Mississippi’s COVID-19 infection rates and hospitalizations are declining, compared to the record highs seen over this summer. State health leadership including State Epidemiologist Dr. Paul Byers cautions that the decline is only relative, however, as rates are no better than in early 2021’s “winter surge”. Photo courtesy State of Mississippi

COVID-19 has entered a relative decline compared to the worst of the winter surge, says leadership from the Mississippi State Department of Health.

“We continue to see some declines in our case numbers and that's been encouraging,” State Epidemiologist Dr. Paul Byers said during a Sept. 24 press briefing for the Mississippi State Medical Association.

Mississippi’s rate of COVID-19 infection is now back at levels seen during the start of 2021, though Byers cautions that the fall in infection rates is only relative.

“It looks like it's a pretty dramatic decline that we're experiencing right now, but we're just now to the levels of where we were at the peak of our winter surge that we had over December and January,” Byers said.

“All of those cases are still translating into a lot of deaths. We had over a thousand deaths in Mississippi in August. We're certainly on pace for that now.”

State Health Officer Thomas Dobbs noted in his own Sept. 24 video update that while Mississippi saw an average decline in daily cases and hospitalizations, the state remains the No. 1 state in the nation for COVID-19 mortality.

Dobbs anticipates additional deaths in coming days. Even as COVID-19 hospitalizations decline, an uptick in other causes is keeping bed usage and intensive-care unit use at “historically high levels,” Dobbs said.

“If we look at our hospital utilization we have 700 folks in the hospital with COVID and declining numbers for our ICU and life support patients,” Dobbs said. “Again, sadly though, many of these won't make it back home, so we'll anticipate seeing additional deaths in coming days.”

Dobbs noted that racial COVID-19 disparities are improving, compared to early on in the pandemic.

“We've had good progress, especially in our disparity work, when it comes to African-Americans,” Dobbs said. “We know that African-American Mississippians are more vaccinated than their white counterparts and our African-American immunization rate is 33% higher than the national rate.”

Early on in the pandemic, Black Mississippians suffered higher infection and mortality rates than white Mississippians. Mississippi’s Black communities suffered upwards of 60% of the infections and deaths from the virus while the state’s white population suffered around 40%. Those numbers have now reversed as more of the populace has received their vaccinations, especially among the elderly.

Demand for monoclonal antibody treatment is in decline, down from almost 10,000 doses administered per week during August to now below 5,000 per week. MSDH leadership continues to recommend MAB treatment for COVID-19 infection, even in those already vaccinated.