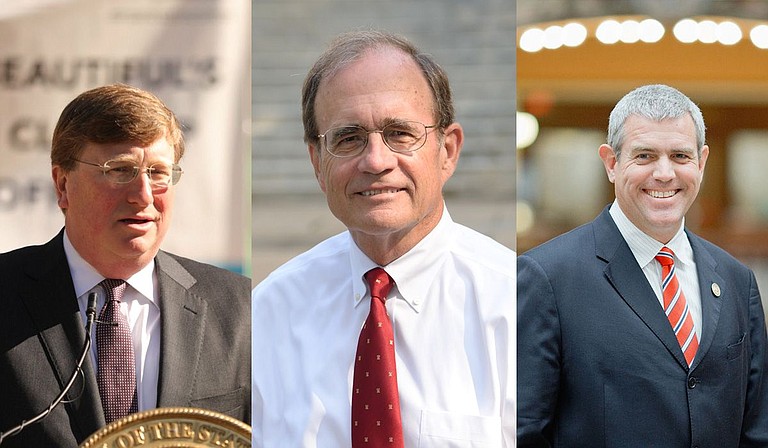 Lt. Gov. Delbert Hosemann (center) and House Speaker Philip Gunn (right) said Friday that they want Reeves (left) to set a special session because negotiators from the two chambers have agreed on a medical marijuana proposal, and they believe they've lined up enough votes to pass it. Photo courtesy State of Mississippi

JACKSON, Miss. (AP) — Mississippi Gov. Tate Reeves on Monday was still not saying whether he will call legislators into special session to enact a medical marijuana program and consider other issues that House and Senate leaders are promoting.

“Nothing today,” Reeves spokeswoman Bailey Martin said in response to a question from The Associated Press.

Lt. Gov. Delbert Hosemann and House Speaker Philip Gunn said Friday that they want Reeves to set a special session because negotiators from the two chambers have agreed on a medical marijuana proposal, and they believe they've lined up enough votes to pass it.

Hosemann and Gunn, both Republicans, also want legislators to approve financial help for hospitals that are trying to keep enough nurses and other employees during the COVID-19 pandemic, authorize death benefit payments for law enforcement officers and first responders who die of COVID-19, and set aside money for shelters that help victims of child abuse and domestic violence.

Only a governor can call a special session and set the agenda. Hosemann and Gunn said they think the House and Senate could complete all the work in a single day.

The new proposal would allow cities and counties to opt out of allowing the cultivation, processing or sale of medical marijuana, but it would also let local voters seek an election to reverse the decisions of those governing boards.

Agriculture Commissioner Andy Gipson, a Republican, said Monday that his department should have no role in a medical marijuana program.

“This agency is not designed nor equipped nor is this agency funded to support such an expansive and expensive program as this proposes to be,” Gipson said.

The proposal specifies that the Agriculture Department could hire another state agency, such as the Board of Pharmacy, to handle its share of work on the program. Gipson said the Health Department should be the only state agency with the power to issue licenses or set regulations for medical marijuana, as was proposed in the voter-approved initiative. Gipson said the Agriculture Department was not asked for any information or ideas when negotiators were writing the new proposal.

“This bill was drafted behind closed doors, outside the committee process — secretly, three or four legislators putting it together without the opportunity of the people of Mississippi to have any input on it,” said Gipson, a former House member. “That's not the way things are supposed to work in the Legislature.”