JSU Education Endowment, Ezra Jack Keats Awards and Out of the Darkness Campus Walk at USM 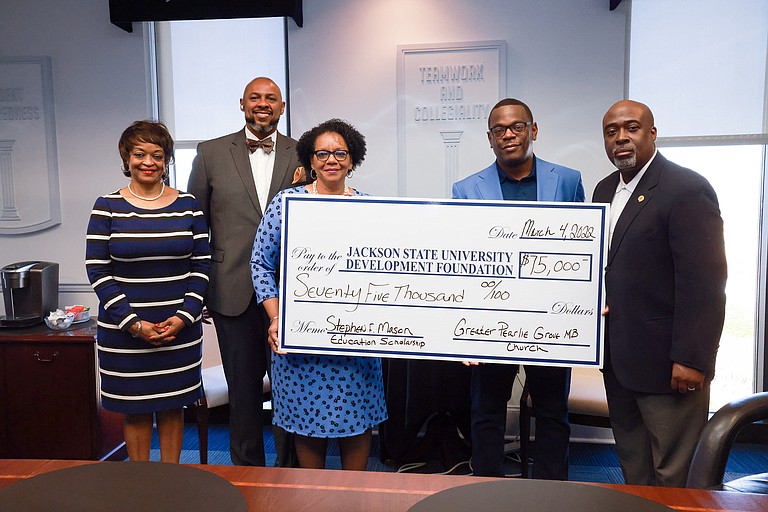 Jackson State University recently received a $75,000 education endowment named for the late Stephen F. Mason, the 17th pastor of the Greater Pearlie Grove M.B. Church. The university will use the scholarship to pay for tuition, textbooks, supplies and other fees included in the cost of education for eligible students, a release from JSU says.

Mason graduated from JSU in 1976 and worked as a teacher in the Canton and Jackson Public School Systems for more than 20 years before becoming an ordained minister in 1988. He served as pastor for Mt. Charity M.B. Church in Carthage for seven years before transferring to Greater Pearlie Grove M. B. Church of Jackson in 1995.

The church relocated from Grand Avenue to its current location at 1640 West County Line Road and held its first worship service in the new location on Sunday, Nov. 11, 2012. Mason led the church for more than 26 years until he passed away in October 2021.

Eligible students for the Stephen F. Mason Education Scholarship must be incoming freshmen or sophomores pursuing a degree in the field of education who maintain a minimum 2.75 GPA; submit three letters of recommendations from school officials reflecting exemplary behavior, leadership, excellence of character or community involvement; and submit a one-page essay explaining how the Stephen F. Mason Education Scholarship will impact their academic career at JSU and beyond.

The Ezra Jack Keats Foundation and the de Grummond Children’s Literature Collection at the University of Southern Mississippi recently announced the winners of the 2022 Ezra Jack Keats Award, as well as four honor books.

The annual EJK Award celebrates exceptional early career authors and illustrators for portraying the multicultural nature of our world in the spirit of Ezra Jack Keats, a release from USM says. Past winners include Oge Mora, Meg Medina, Christian Robinson, Bryan Collier and Sophie Blackall.

A virtual award ceremony will take place on Thursday, April 7, during the Fay B. Kaigler Children’s Book Festival at USM. To register, click here.

The 2022 Ezra Jack Keats Award winner for Writer is Paul Harbridge, author of "Out Into the Big Wide Lake," and the winner of the Illustrator award is Gracey Zhang for her book "Lala’s Words."

Ezra Jack Keats Award Honor winners for 2022 include Joanna Ho for "Playing at the Border" and Anne Wynter for "Everybody in the Red Brick Building." Illustrator honors include Marta Bartolj for "Every Little Kindness" by Marta Bartolj and Kenesha Sneed for her book "Many Shapes of Clay."

USM Hosting Annual Out of the Darkness Campus Walk

The University of Southern Mississippi and the Mississippi chapter of the American Foundation for Suicide Prevention will host the annual Out of the Darkness Campus Walk on Saturday, March 26, at 10 a.m. USM School of Psychology students, faculty and staff organize the event. Registration will take place at the Bruce and Virginia Wilgus Fitness Trail located next to the Payne Center on the Hattiesburg campus.

This event will support the AFSP’s education and support programs and its goal to reduce the annual U.S. rate of suicide 20% by 2025, a release from USM says. In addition to raising awareness and funds to fight suicide, the Walks give those who attend a chance to connect with others and know they are not alone, whether they walk in memory or in support of a loved one or in honor of their own mental health journey, the release says.

Individuals can register to join an existing walk team or create their own team. Sponsorships are also available. For more information, visit http://afsp.org/usm or the event’s Facebook page here.