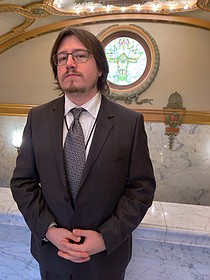 Reporting Fellow Julian Mills is a Jackson native who loves history and graduated from the University of Mississippi with a bachelor’s degree in political science.

At-risk Mississippians over 12 years of age as well as anyone over 50 are now eligible for a second booster dose, thanks to authorization from the Food and Drug Administration today.

A federal program closing this week could mean less access to COVID-19 testing and treatment for poorer Mississippians moving forward.

In the midst of severe weather threatening Mississippi and the larger South, Jackson Mayor Chokwe A. Lumumba issued a proclamation of a local weather emergency this morning closing vulnerable locations and providing a notice of sandbag availability to help prepare for the storm.

Echoing deepening sanctions from the U.S. government, both the Mississippi House of Representatives and Senate passed resolutions this week condemning Russia’s ongoing invasion of Ukraine and barring any business between state entities and Russia.

Two weeks after filing a lawsuit against the City of Jackson, garbage-disposal company Waste Management has voluntarily filed a motion for dismissal of its case.

As COVID-19 continues its decline across both Mississippi and the United States, the Biden administration has made additional COVID-19 test kits available for free home delivery to every household in the country.

Lumumba Apologizes for ‘Distraction’ over Dispute with City Council

One week after accusing Jackson City Council members of taking bribes in order to steer government contracts, Mayor Chokwe A. Lumumba walked back some of his rhetoric, in tone if not in content.

‘Babies in the Hospital’: Mississippi Drastically Lags in Child and Pediatric Vaccinations

As COVID-19 continues its decline across Mississippi and the country, state health leadership warns that hospitals are still seeing pediatric patients, while vaccinations in children are lagging far behind the national average.

Amid an ongoing dispute between Mayor Chokwe A. Lumumba and the Jackson City Council over garbage-disposal contracts, the mayor said that he believes certain members of the council have accepted bribes.

Jackson’s Community Cleanup Program—meant to help support residents in clearing trash from their neighborhoods—is set to resume on the first weekend of March, after city officials put the program on hiatus last November.